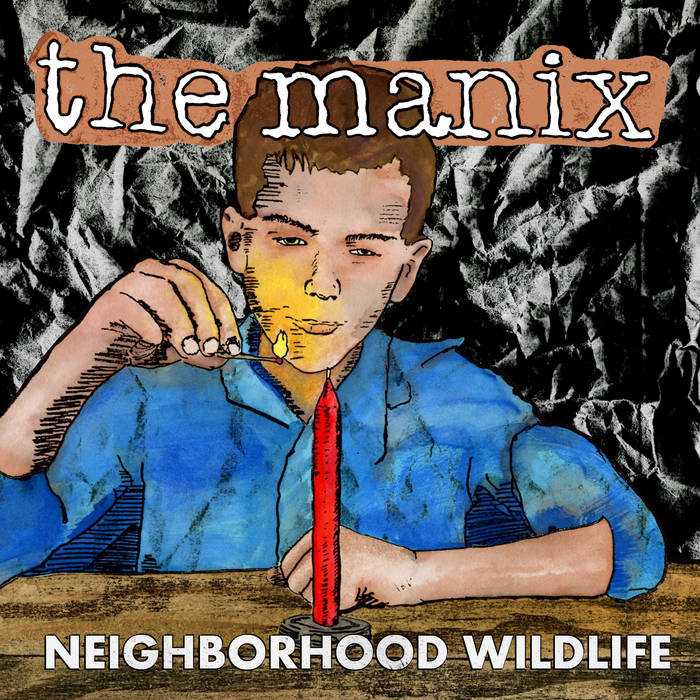 "Neighborhood Wildlife" was written by The Manix
It was recorded by Dan Jensen February and March 2011
@ The Hideaway in Minneapolis
Mixed and Mastered by Jacques Wait
Additional backups on 'Jesus and Marketing' by D. Jensen
Art/ Layout done by C. Ayd
All songs © The Manix 2011


From the It's Alive Records Website:
Enough is enough. Minneapolis punk bands seriously need to take a year or two off and let the rest of the country catch up with their awesomeness. It really is getting ridiculous how many incredible bands call that city home. Being the land of a thousands lakes, I gotta believe it is something in the goddamn water. Sure, many of the bands coming out of MPLS have similar sounding styles, but why is that a bad thing if their styles of choice kick my ass every time?

The Manix are the latest musical champions from this magical land to have graced It's Alive Records with the privilege to release a record of theirs. Their debut album Neighborhood Wildlife is packed with a dozen jams that absolutely kill it with every listen! The songs showcase a great mix of the shoutalong go-for-broke anthems super-prevalent in the basement scene of today's midwest and the ultra catchy head-bopping melodies that are the core of all pop punk past and present. The lyrics are smart, thoughtful and heartfelt without any hints of trying too hard to be anything they aren't. The album was mixed at mastered by Jacques Wait - the man behind the boards for many an album from other MPLS locals such as Off With Their Heads, The Soviettes, Dear Landlord, Banner Pilot and The Gateway District - so you know this shit sounds tight!

Frontdude Corey Ayd spends his time away from The Manix as a member of the professional punk rock group Banner Pilot, so there's a whole wealth of incredible music to feed off of right there. He also sings like the hell-spawn lovechild fathered by Billy "D4" Morirsette after having had his way with dreamboat Zack "Landlord" Gontard. Drummer Mike Cranberry also plays in Nato Cole's latest rock group The Blue Diamond Band and is the sweetest dude on planet earth. I don't know too much about the other Manix men Steve and Tyler other than their names combined read like Steven Tyler (fuck that guy), they look like they are in Jr. High and they play guitar and bass like total champs.

How these kids in their early 20's come off sounding like the new demigods of punk rock I have no idea, but they do... It's gotta be the fucking water!

Bandcamp Daily  your guide to the world of Bandcamp